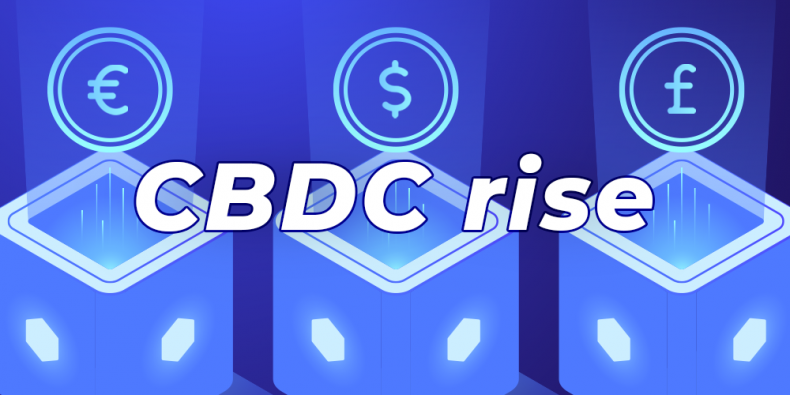 CBDC stands for Central Bank Digital Currency and is a virtual copy of fiat money.

With pandemic spread around the globe, people start refusing to use cash preferring more and more digital means of money.

The cryptocurrency market is growing, and if you check CMC Tether USDT is in 3rd place there. What does it say to us? Cryptocurrencies have emerged with ICOs, they were not meant to be used as a method of payment at first but designed as a form of investment. As blockchain technology proved a better, easier, more transparent, and cheaper way for financial relations, stable coins were created to serve as a means of payment. Stable coins are pegged to some stable value. The most popular is Tether USDT. Tether's success proves that the crypto methods of payment work and have been accepted widely now.

CBDCs are stable coins issued by Central Authorities. This year, we saw announcements of CBDC projects being made country by country. Please see below the table with states working on CBDC projects and their current stage of progress.

As you can see from the table above most of the economically developed countries are already working on their CBDCs, the majority of them are yet at the research stage.

One of the first governments diving into crypto space was China. The reason for that is the fact that many of the popular trading platforms in China (such as Alibaba, etc) are accepting digital money. This pushed China to pioneer its state stable coin earlier than others.

Pandemic accelerated the usage of virtual devices and touchless payments. As blockchain-based payment systems gain against the existing mobile-bank and other methods, this also has become recognized by the states.

It is understandable that after one state has gone into launching its digital currency the other states will follow. Now it has become a matter of urgency. Whoever comes last, will already be outside of the new building now infrastructure. That is why we expect a highly competitive and fast development of this market now.

This table above suggests that in the next 5 years, we are going to be in a transition period from old banking to new digital finance. Time deadlines are about the end of 2021 - research outcomes and first pilots, by 2025 probably the change of the whole industry.
What does it mean for banking and finance? Effect on banking will be loss of middleman position, loss of earnings in a way it is structured now.  There will not be a place for a high commission application any longer, no extra security lawyers, no multiple participants for proceeding with one simple transaction. For banks this is a new era, the only way to keep their positions in a market is going into collaborations with technological companies and implementing new blockchain-based payment systems. The faster they move the better for them. Paypal is the first example.

Central Bank Digital Currencies' recent rise is an important trend. It is a sign of mass adoption we are heading to.

In my opinion, the CBDCs niche is one of those sectors that will be developing quicker than other digital currencies initiatives. Crypto adoption will be happening here faster, as these projects are initiated by the governments themselves. This will mean new laws designation in a faster mode, new institutions evolvement.

From this point of view, of course, for Credits, it is desirable to participate in some of the working groups dedicated to the subject.

The Credits team prepared the concept of CBDC. This includes token issuing, mechanisms, and rules of its circulation. We are working on a project for CBDC realization, and as of today, finalizing the details of the launch of stable coins pegged by EURO, GBP, and USD. Announcements will follow. Be with us.