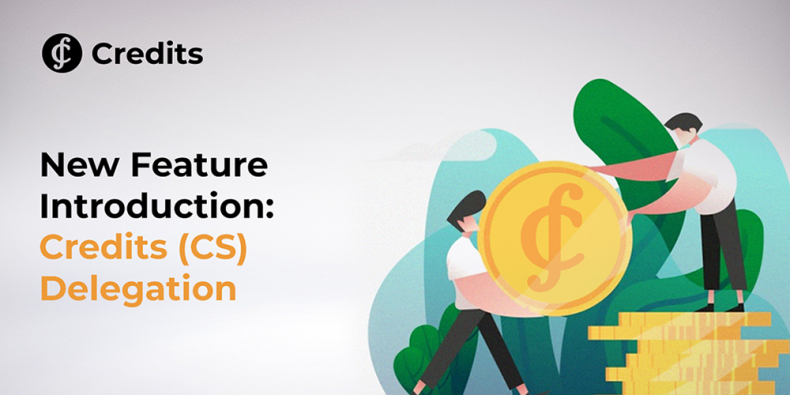 Credits team is glad to announce the successful implementation and the beginning of the testing period for a new function called “Delegation”. The delegation functionality is already available for testing in the Credits Testnet network.
This function gives an opportunity for people to create pools and increase their nodes’ revenue. Moreover, users who run their nodes using the VPS can delegate the CS native coins to nodes deployed on third-party servers to eliminate any potential security flaw.

Delegation is the ability to move the native Credits platform CS currency between two wallets without transferring the ownership of the coins to any other user. The delegation function also grants users the ability to return their funds at any time.
Once placed in a user’s wallet, the delegated funds cannot be used for any purpose other than as a stake for a network node. In essence, the funds are frozen and cannot be transferred from the wallet. They can only be returned back to the owner’s wallet.

The following steps allow users to delegate their coins:
The coins delegated to any specific user can be returned at any time. The following are the steps needed to return the delegated coins:

Coin delegation transactions are public and can be viewed using the Credits blockchain explorer. Currently, users can only delegate funds using the Desktop Wallet. In the future, this feature will also be available using the Web Wallet.
The given functionality is planned for implementation in the Mainnet during the next few updates after the necessary tests in the Testnet are completed.
Share article